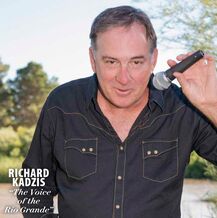 The Buzzman – Voice of the Rio Grande

Join the Buzzman on Tuesday for the spontaneity, the flow and the fusion that jazz is known for.
​
Richard Kadzis, aka “The Buzzman,” has an extensive broadcasting and media career, having worked for 16 networks, news services and stations including Associated Press Audio, ABC's Monday Night Football, NPR’s All Things Considered, Pacifica National Radio’s Democracy Now, and WBUR-FM’s Prime Time News in his hometown, Boston.

In 1974 as a student at Connecticut College, he cofounded WCNI-FM, a community radio station still serving New London, CT.

His program, The Altitude Adjustment, for KBUT-FM, community radio serving Crested Butte and Gunnison, CO, earned the Buzzman “Top DJ of the Year” honors in 2017 before joining the KTAL-LP team in Las Cruces to host Tuesday Night Jazz and Reelin’ in the Years (Friday rock n’ roll).

The Buzzman was dubbed “The Voice of the Rio Grande” by Sonoma Ranch Magazine for working on-air simultaneously at KBUT and KTAL in the summer of 2017, when KTAL went live.
​
He holds an MS in Mass Communication specializing in broadcast journalism from Boston University’s College of Communication.