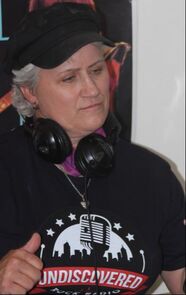 Progressive rock from the 60s to today. Playing mainstream, independent and underground prog. The genre showcases musical virtuosity and experimentation. Prog rock is highly influenced
by classical and or jazz music

​Julie has a wide variety of musical tastes and passion for music as well as radio. In her youth, her radio was on 24/7, listening to 70s radio legends Gordon McClendon, Michael O'Shea and Kevin McCarthy on KLIF and sister station KNUS in Dallas. Later, she listened diligently to Casey Kasem every week on American Top 40. She was also always seeking out rare and obscure music. When her siblings would buy a 45 single, Julie would always flip it over and listen to the other "B" side. Her main passion, however, was for progressive rock, a genre that she can trace her attachment to, as far back as 1971 when she was 8 yrs old.
​
Julie was extremely shy all of her life, and after listening to many DJs get information wrong about some artists, she decided that it was time to try to become a DJ herself - despite her anxiety of speaking in public. She became a volunteer DJ at KUNM Albuquerque. This stint lasted for four years until she moved out of the state.
​
Later, after a decade of considering starting a music podcast, Julie finally gave it a go, and in February 2016, she started “Progkast” - an all independent progressive rock podcast. Two episodes of the podcast were aired on KTAL-LP on July 28, 2017. Two more shows were aired as a Halloween special on October 31, 2017. Her all inclusive progressive rock show Prog Rock Nation started regular airtime on Saturdays in April 2018. Julie has also recently joined the Scheduling/Tech and Programming committees at KTAL-LP.