YOUR MULTICULTURAL MINUTE WITH NORINE DRESSER 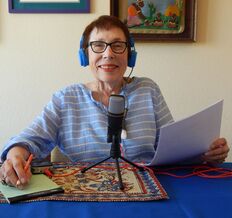 Norine Dresser's major passion is about diversity and how cultural differences affect communication. This has been a major motivation for writing numerous books on the topic and serves as the theme of her KTAL 2 -minute radio show, Your Multicultural Minute.

Norine Dresser is a folklorist, retired University professor (CSULA), book author and award-winning writer of an eight-year column in the Los Angeles Times(1993 to 2001). In 2012, she moved to Las Cruces from Los Angeles, where she was born, educated, married and had children. Upon settling here, she began a blog, "Norine's New Life @80" encouraging seniors to not sit around and bide their time. Instead, they should engage in life fully for as long as the body allows.

Practicing what she preaches, she is an active member of the Las Cruces Ukes, belongs to the National Federation of Press Women and New Mexico Press women where she has won awards for her blog and radio show on KTAL. She has been a volunteer at the Institute for Historical Research since 2013, digitizing her slide collection that documents cultural and historical events of the past, for example, images captured on Hollywood Blvd. after George Harrison died. At the sidewalk stars for the Beatles, grief-stricken fans gathered to sing, place flowers, even a guitar, on Harrison’s star.  Eventually her thousands of slides will be accessible online

Dresser’s eclecticism has led to a myriad of research topics, e.g., American Vampires. This resulted in a trip to Romania sponsored by the Romanian Bureau of Tourism to attend the First World Dracula Congress,1995. Her American Vampires: Fans Victims and Practitionersbook (Norton,1989), established her reputation in vampirology resulting in participation in an international TV show, filmed in Hungary called “Dracula, Live from Transylvania.” There she appeared in a scene with actor, George Hamilton.

Other topics of her research include missing gerbils (“The Case of the Missing Gerbil”) ; Jewish shopping habits (“Is It Fresh?”); Anti-Semitism at Annapolis  (“The Perforated Page”); Male homosexual jokes (“The Boys in the Band Is Not Another Musical”); Human/Animal Relationships (“The Horse Bar Mitzvah”).
Currently, she is establishing an online Gallery of Folklore & Popular Culture consisting of artifacts she has collected that reveal cultural clues to our past.