MONSOON DOWN THE RADIO WITH TIM "TATER" STALEY 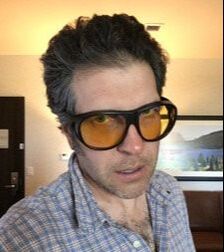 Monsoon Down the Radio: Aesthetic: global fry and poetry, mostly. Each week I try my best to redefine the purpose, scope and inanity of a DJ.

Tim Staley was born in Montgomery, Alabama, in 1975.

His newest poetry chapbook, The Most Honest Syllable Is Shhh, is available from Night Ballet Press.

His debut poetry collection, Lost On My Own Street, is available where books are sold from Pski’s Porch Publishing.

He founded Grandma Moses Press in 1992, and currently serves as publisher and primary care giver.
​
His hip hop persona is Mc Flashcard. His DJ persona is Tater, and he produces 3 hours of weird, poetry-inflected radio content a week for KTAL LP 101.5 Las Cruces.

He went to poetry school at the University of Alabama and New Mexico State University.

His awards include The 2004 Peter Harris-Kunz Endowed Award in Poetry, The 2012 Luminaire Award for Best in Poetry, and the 2016 Dona Ana Arts Council’s Arts in Education Award.

His chapbook Mr. Staley Always Lets Us is in the Archives and Special Collections at New Mexico State University.

He lives with his wife and daughter in Las Cruces, New Mexico. His hobbies include microwave nachos.

March 12 (rebroadcast March 14)
This week's sequence is called Hippie. What is a hippie in 2021? We will hear people like Brant Bjork and Coriky. Also new music from Graeme James and Buck Meek.

March 19 (rebroadcast March 21)
We are all starved for live music because of the pandemic. This week's episode will be all live music. Warning: sound quality may be compromised as these will be field recordings only. Warning 2: Lady Poppy said nobody wants to hear crappy sounding live recordings. She may be right.

March 26 (rebroadcast March 28)
Continuing our series on Classic American poets, we will get into Robert Frost. What's his deal? Also, we'll hear from Roy Orbison, Betty Wright, The Cowsills and Better Than Ezra.

April 2 (rebroadcast April 4)
For Jazz Appreciation Month we will present our first of three shows focusing on Jazz. This week's sequence is called ON THE TRAIL. We'll hear from Abbey Lincoln, Nina Simone, Cassandra Wilson and more.

April 16 (rebroadcast April 18)
For Jazz Appreciation Month we will present our third and final sequence focusing on Jazz. We will hear from Calvin keys, Immanuel Wilkins, Dorothy Ashby, Sonny Criss and more.

April 23 (rebroadcast April 25)
We will focus on the best new music to have been released in the first few months of 2021. You know Tater will pay attention to his Canadian hotspot with artists like The Weather Station.

April 30 (rebroadcast May 4)
We will continue to focus on new music if there is enough new music worth focusing on. Otherwise I will just try to find whatever sounds the most fried.
Monsoon Down the Radio Archived Shows