LIVE FROM THE DOUBLE WIDE WITH TERESA TUDURY 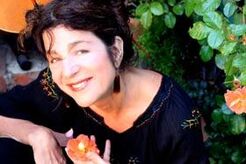 You'll hear a mix of great singer/songwriters, R&B, indie, blues, gospel and alt country on Live From the Double Wide. Host Teresa Tudury is a noted singer/songwriter and touring musician herself who has met a lot of famous musicians and even more that never got the recognition they deserved. "Everyone I play on my show is someone i know personally and have worked with or have had some dealings with," Teresa says, "so the music gets interspersed with stories or bits of history about each artist."

Tersea started writing songs at age 12 and was performing in San Francisco nightclubs by the time she was 15. She has played on and off in the Bay Area for years, and for almost two decades was based in Los Angeles where in addition to music gigs, she wrote comedy and worked as a character actress on stage and screen.
​
With a deep, sultry voice that magnetizes audiences, and a scathing comedic wit to match, Teresa is a consummate performer who pours out her original songs with power, verve, passion, and disarming humor. Teresa's voice has been described as a cross between Bette Midler and Bonnie Raitt (LA Weekly). Her vocal stylings are perfectly complemented by her bluesy guitar playing.
Throughout her career, Teresa has recorded or performed with such greats as Leonard Cohen, Rickie Lee Jones, Lyle Lovett, Taj Mahal, Leo Kottke, Charlie Musselwhite and Bonnie Bramlett. Now residing in Mesilla, Teresa continues to perform and write new material. She has just released Such Fine Things, her latest CD. Her earlier recordings (1992's Teresa Tudury and 2002's River Of Life) were recently rereleased. With these recordings and a steady stream of concert appearances, Teresa is a gifted artist in her prime. Visit her website at teresatudury.com