EYE ON GOVERNMENT WITH WALT RUBEL ​ 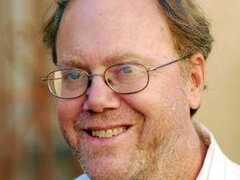 Veteran journalist Walt Rubel reviews the important local news stories of the week, and reports on what's going on with city, school board, county and state government, focusing on local government in Las Cruces and Dona Ana County, and inclues interviews and sound bites from local meetings.

Walt had been a print journalist for nearly four decades, starting as a sports writer for the Tribune-Democrat in La Junta, Colo. in 1982. In 1988 he won the Colorado Press Association Sweepstakes Award for best sports story of the year among all daily newspapers. His story on the Florence High School girls basketball team beat entries from the Denver Post, Rocky Mountain News and other much larger newspapers.

He went on to work at sportswriting jobs in Cheyenne, Wyoming; Manteca, California and Hutchinson, Kansas before moving over to news. In Hutchnison, he joined the newspaper’s editorial board, and began writing news columns and editorials for the first time.
He came to the Las Cruces Sun-News in the spring of 2002, and remained until February, 2019, when his job was eliminated as part of a companywide downsizing. He was a member of the editorial board that entire time, including three years when he worked in the company’s Santa Fe Bureau. He continues to write a weekly column for local outlets other than the Sun-News.

He started Eye on Government in August, 2019 as a way to stay involved in journalism and, hopefully, increase community awareness as to the actions taken by the City Council, County Commission and School Board.
Eye On Government Archived Shows