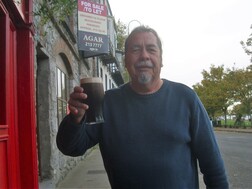 Rob Hinton is a native New Mexican, born and raised in Albuquerque, and residing in Las Cruces since 1992. Ever since the early 1960s when he received a pocket-sized 9 volt battery operated transistor radio as a Christmas present and sang holiday tunes along with Alvin and the Chipmunks, he has always been a huge radio fan. Rob is truly a twentieth-century man: born in the fifties, grew up in the sixties, partied down big-time in the seventies, married and somewhat settled down in the eighties, and along with his wonderful wife, Marjie, adopted two daughters in the nineties. Fast forwarding to the present time, Rob is now a retired “grandpa”, who enjoys having a couple of pints with friends and strangers alike, as well as reading real books he can hold in his hands, listening to 33 1/3 LP vinyl records, going to watch live theatre, and holding doors open for women as they enter or exit a building. Although he is starting to lose his hair, he plans on retaining his “pony-tail” hairstyle for as long as he can. As Rob is a true twentieth-century man and has no social media presence what-so-ever, as he prefers to be present in the real world, “pressing the flesh” and interacting with breathing human beings on a “face-to-face” basis. Having Bachelor’s and Master’s degrees in history from NMSU and Colorado State University respectively, he is an avid history buff who always includes some sort of historical component to his radio broadcasts.

​Ever since the fledgling Las Cruces community radio station debuted with its initial broadcasts in July of 2017, Rob has been the host & producer of Chicken Pot Pie, a variety radio show featuring a potpourri of information, guest interviews, literature, drama, history, and music, airing live on Thursday evenings from 5-7PM on Que Tal Community Radio, KTAL-LP, 101,5FM, Las Cruces, NM. Being a volunteer DJ is one of Rob’s favorite current activities and he highly recommends that others consider getting involved with community radio, as the work is satisfying, fulfilling, and worthwhile; not to mention being lots of fun.