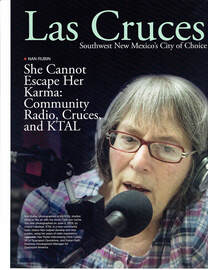 ​Nan Rubin has been a community media organizer and activist for more than 40 years.  Focusing on policy and infrastructure for community-based media, she has built 3 community radio stations – WAIF n Cincinnati, KUVO in Denver, and KTAL-LP in Las Cruces –and she was a founding member of the National Federation of Community Broadcasters (NFCB) and Montreal-based AMARC, The World Association of Community Radio Broadcasters, which has allowed her to travel widely visiting community broadcast and production projects around the world.
​
She helped create both the contemporary movements for Media Reform and for Media Justice, and she was the only representative invited to testify on behalf of community media at the FCC Special Proceeding on the Future of Public Media.
Nan has a particular focus on media projects serving ethnic and minority communities, and she has special expertise on Native American media. Her 1987 report on the State of Native Radio was used as the primary reference on reservation-based radio stations for nearly a decade.

Among her production credits, Nan was Project Director for Living Voices, a 45-part series of profiles of Native Americans produced by the Smithsonian National Museum of the American Indian; and the 3-part Search for the Buried Past: The Hidden Jews of New Mexico, one of the most popular series ever aired on NPR. She now acts as Executive Producer for KTAL and hosts the weekly live community affairs program Café con Leche.

With a strong technical bent, Nan has also worked extensively on technical projects. While working at PBS station WNET in New York City, she was part of a small team that worked for 3 years to restore WNET’s analog and digital transmission facilities that were destroyed on 9/11.  Also, for nearly a decade she led Preserving Digital Public Television, a $10M national digital video preservation project funded by the Library of Congress.

Nan is a Founding Member of Jews for Racial and Economic Justice in New York City and she served as Chair of the Philadelphia-based Prometheus Radio Project for more than 10 years. She moved to Las Cruces in 2013 from New York City and was immediately recruited by SWEC to help build Las Cruces Community Radio. In 2017 she won the “Newcomer Award” from the Doña Ana Arts Council, and she was thrilled when KTAL-LP hit the airwaves in August 2017. Visit Nan's webpage at   http://www.nanrubin.net/