ALL ABOUT BOOKS WITH LYNN MOORER 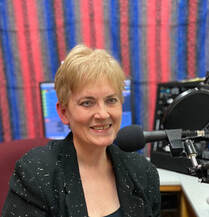 Lynn prizes excellent, engaging writing and the printed word.  Struck by the wealth of book authors in the southern New Mexico area, she began her show “All About Books” on KTAL in 2017, shortly after the station began its broadcast operations, to showcase and encourage these authors.  She finds that books are best experienced and appreciated when printed on paper and bound by publishers.  (She also finds that every writer needs at least one eagle-eyed and erudite editor.)

A native Nebraskan, Lynn relocated to Las Cruces in 2014, after practicing environmental and public interest law in Nebraska for 15 years, to take care of her parents.  She has received awards for her legal writing.

Before moving into the legal arena, Lynn earned an undergraduate degree in vocal performance and sacred music, serving as director of music and/or organist at several churches in Lincoln, Nebraska.  She was honored to sing the mezzo-soprano solo in Aaron Copland’s “In the Beginning” with musicians from Nebraska Wesleyan University with Copland conducting in 1977.

She later earned a master’s degree in journalism with an emphasis in broadcasting and worked as a journalist.  Lynn then did the Lord’s work as a public interest environmental consultant and citizen leader, successfully fighting the siting of a nuclear waste dump in Nebraska.

Lynn currently serves as Sub-Dean of the Las Cruces Chapter of the American Guild of Organists and substitute organist at St. Paul’s United Methodist Church in Las Cruces.  The AGO supports fine organ and choral music, organ playing, and church musicians.  Lynn led the Chapter’s multi-church ecumenical hymn festivals in 2018 and 2019.
All About Books Archived Shows