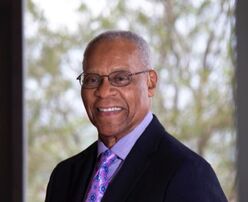 ​Delano E. Lewis, Sr., a native Kansan, received a Bachelor’s Degree from the University of Kansas in 1960 and a Juris Doctorate Degree from Washburn University School of Law, Topeka, Kansas, in 1963. Mr. Lewis served ten years in the Federal Government from 1963 until 1973.
​
He served as an attorney with the Dept. of Justice; as an attorney in the Office of Compliance in the Equal Employment Opportunity Commission; Associate Director of the US Peace Corps in Nigeria and Country Director of US Peace Corps in Uganda; Legislative Assistant to US Senator Edward W. Brooke of Massachusetts and Chief of Staff for Delegate Walter Fauntroy of the District of Columbia.

In June 1999, President Clinton nominated Delano Lewis as US Ambassador to the Republic of South Africa.  The United States Senate confirmed him on November 10th 1999.  He assumed his Ambassadorship in Pretoria, South Africa on December 22, 1999 and served until July 13, 2001.

In September, 2006, he assumed the position of Senior Fellow at New Mexico State University where he established The Institute for International Relations.   He   served as the Director of the Institute.  In addition, Mr. Lewis now serves on the board of the American Institutes for Research.  Mr. Lewis has served on the Corporate Board of Directors for the following organizations:
• Colgate Palmolive
• Eastman Kodak
• GEICO
• Black Entertainment TV
• Apple Computer
• Halliburton
• JP Morgan Chase

Mr. Lewis is the author of the book “It All Begins With Self” an Amazon “Best-Seller” in four categories.